It's been awhile, thought we'd ease back into this thing with a process post on one of my most recently completed paintings. 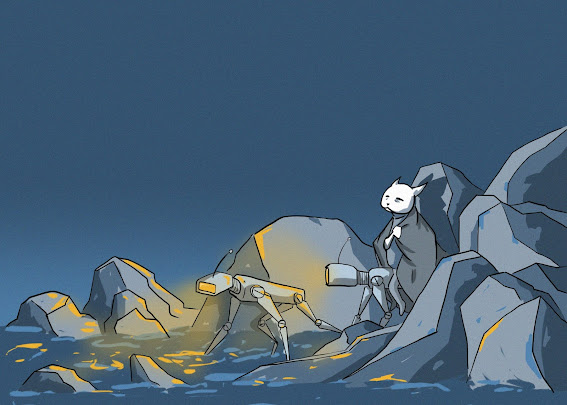 This is the third iteration in the floating series, which really wasn't intended to be a series at all to begin with.

It started with this: 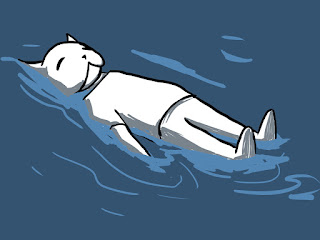 This was just a little exercise, a small little study. I'd been thinking a lot about water imagery and symbolism, as one does.

And then I gave the floating guy a little more space: 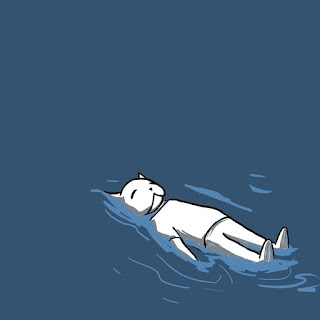 And then I just started working in the open empty space. I put in a couple of robots, inspired by Boston Dynamics' "Spot," and other similar sorts of robots. I played with dappling and reflecting light on the water, and that became floating2: found, and a loose story starting taking shape. 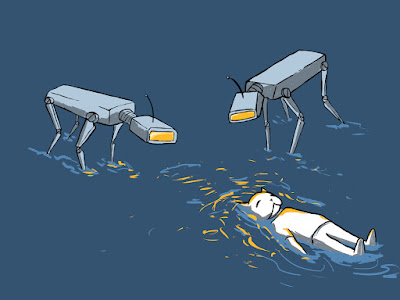 I was really pleased with how this piece turned out, so I started vaguely planning out something sequential. I had some helpful input from others too, and I started scribbling ideas on scrap paper, nothing that was concrete or descriptive enough to mean anything to anyone other than me. My shorthand is quite illegible at times.

I often struggle with creative block, and I've been trying something new recently, is to revisit old, unfinished works. It's nice, you can go back to something that's already been somewhat started, which removes the hazard of Blank Canvas Syndrome, and if you're really lucky there's something salvageable, perhaps the composition, or at least a concept.

I still had an underdrawing that was enough to go on. So after months of neglect, I picked it back up.

The first floating pieces were done in Clip Studio Paint, saved as CSP files. For this next one I proceeded initially in Photoshop PSD, I think at the time it was because I had just come off a Photoshop-intensive project, so all of the reflexes and shortcuts were fresh in my mind. For the duration of this project I worked between the two programs. Clip can open and operate PSD's, the only issue in my experience is that if you are using complex assets or procedures that are a little too particular to one program or the other, in transference they can become flattened or deleted. I don't really use any fancy custom brushes for the most part in doing illustrations like these. A hard round, toggling pressure for width and opacity here and there, or the odd rectangular brush, gets most things done.

At this point I realize I've struck too far out of balance, it's too flat in some areas for my liking, I've deleted some of the painterly touches that I found attractive in the first place. This requires correction. One of the most valuable skills in art (presumably applicable elsewhere) is to know how to see what is wrong, why is wrong, and how to make right - or less wrong.

And way she goes boys. It was nice picking it back up, and I've renewed my interest in this series again for now. Hope you find the breakdown interesting. Ta.