One of the other intents with this blog was to populate it with previously unreleased short fiction. The following was initially written around two years ago.

“My eyes have seen the glory of the draining of the ditch
I only come to Baton Rouge I gotta find myself a witch
I'm gonna snatch me up a couple of em every time it rains”
- Tom Waits, “Whistlin’ Past the Graveyard, 1978

“So, Mr. Stills, what brings you to Baton-Rouge?”

The ad was put up online. It read: Need a real witch. I’ll be at the bar at Charlie’s. I wear a red
shirt. Ask Charlie. Within the week, hopeful candidates filtered in.

“You got imitation voodoo from a shopping mall and your face says ‘I believe in crystals.’ No
thanks.”

“Sheezus, you don’t get real witches too much anymore. Charlie, you remember old Missus
Benoit?”

“She was a witch, man. Real voodoo hoodoo. She even had a crystal ball someone gave her,
but it had an inch of dust on it ‘cause she never did have need for it.”

“I remember the crystal ball.”

“I should just look her up. She still above dirt, or the devil finally come callin’?”

“She died winter of two years ago.”

“Really? Damn, I should’ve been there for the funeral. Just damn. She was a wonderful lady, in
a mean way.”

“You a witch, little girlie? Naw you ain’t. Get lost.”

“Am so! It’s the truth even though you don’t believe me!”

“No, you ain’t. You kids just get caught up in the look of it, you want talking cats and colored
potions, but you don’t know nothin’ about actual witching. I’ve met a real witch, Old Anna Benoit,
and she wasn’t some goddamn Halloween costume!”

“Yes I am! I’m a witch and my gramma was Anna Benoit an’ she taught me things an’ though
momma was a christian and did try to keep me away from witchcraft all the know-how I got from
gramma still stuck an’ I’m a witch!”

“Whoa, okay, slow down girlie. You say your gramma was the Anna Benoit?”

“That’s a bold claim, and I’m afraid you’ll have to prove it. Not many folks used Anna Benoit’s
name in vain.”

“Maybe so. Tell you what, Missus Benoit used to do readings by looking in the glass a man had
been drinkin’ from. So look into the bottom of my glass and tell me somethin’ about myself.”

“Ah-ah girlie, one more thing. If you got Anna Benoit’s blood in you then liquor’s like water to
you. Read my past outta an empty glass.”

She drained the glass in a fluid, sure motion. And then she told him something he had only ever
said aloud to himself, seven years ago.

For my first post beyond the initial introductory, I wanted to do a write-up on how I approach making an illustration. The piece up for dissection was chosen because I had already documented steps taken during construction, which makes for an easier breakdown. In digital art there is procedural process, but it is often rapidly obscured, I will begin painting and drawing on top of a thumbnail, and sooner or later the layers are merged to conserve RAM and tidy the workspace.

So, the project. I was developing a five-image series for the Tabula Rasa Record Company, and generously given free reign on what to do and how to do it. After some brainstorming and some back and forth with the label director, I settled on a concept for a series of watercolor paintings, and began. This will be an overview for the first piece in the series, which would ultimately be titled "neo nio 1."

As with pieces I make, it starts in the head, letting ideas stumble and collide, with occasional injection of outside observance. It's not an easily communicated process, as I find it to be a largely passive method. But to recollect what I can, with this project I was thinking about pandemics and about rituals in the modern age.

I started out with a quick thumbnail, it's all really just shorthand to rapidly establish the ideas of shapes and how they'll interact with each other. The two core images that I start with are contemporary safeguards against plague (gloves, masks) and ancient ritualistic protections (the Hebrew symbol of Passover in lamb's blood, raised hands of purification). 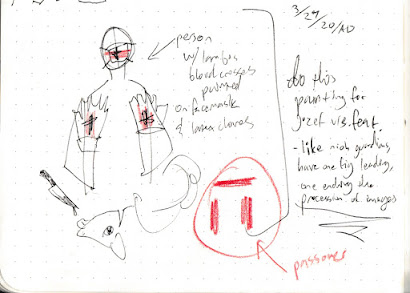 As you can see, at this point the thumbnail is so esoteric it really only has use to me.

There was a secondary thumbnail that was developed from this initial scribble, drawn up on a scrap of scratch paper, but it has been unfortunately been lost, so I hope you'll be forgiving over the apparent leap in the creative process.

A quick note on etymology:

Sometimes the titles are last, but just as frequently the development of a title aids in the formative steps. In this case, the "nio" is derived from the Japanese "Niō" or often Kongōrikishi, the twin guardian spirits of the Buddha, often standing guard outside of temple entrances.

With the thumbnails done, the next step is to gather reference imagery, for the purposes of this project this was accomplished through cursory google searching as well as some live modeling. 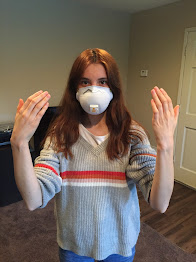 Clio the model :)
The drawing is laid out on 140lb (300g/m^2) Arches Cold Press paper, it's one of my standards for more finished work. The cotton and gelatin content make for an excellent blend of durability and versatility. I lay into the paper with graphite, working in harder leads (2H-5H) to ensure cleaner erasure later. When the linework is defined, I begin to ink. 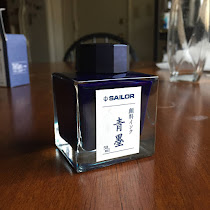 I use Sailor Seiboku, a blue pigmented ink run through a Pilot Metropolitan fountain pen. 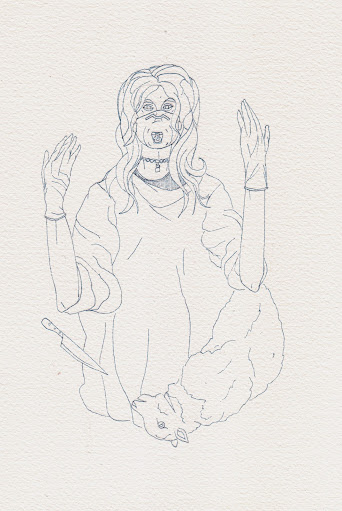 The final drawing, with graphite erased.

For the painting process, I generally start with a mental color palette, and procedurally generate swatches on scrap paper, mixes are created and corrected on the fly, working in thin layers to build up hue. Eventually I'll do a painting with documentation taken between brushstrokes so the process will be more transparent. After base colors are all well-established, shadow tones are filled in to boost contrast and add depth.

Once the final physical details are finished, I move to digitally processing the image. This step is not as time or effort-intensive as the manual painting, but demands fair attention. Because the final output of this project is digital, and its viewing will be almost primarily through digital medium, the scan must be refined for legibility. 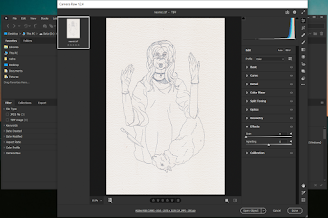 There are a host of programs that you can use for image processing, I've just been raised on Bridge. Bridge rocks. It's like Finder or File Explorer on crack.

I scan at 600dpi in full color TIFF files, as reduction can always be enacted later. I edit using Camera Raw in Adobe Bridge, and after balancing light, color, contrast, and detail, the image is exported through Photoshop's Image Processor, spitting out flattened TIFF and JPEG files which are readily adapted to printing or online display. 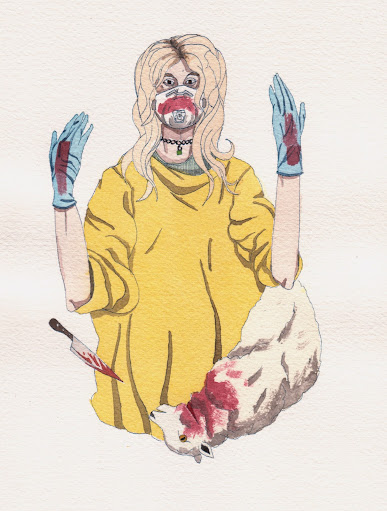 The final image, sent off. It can be difficult to achieve a one-to-one likeness with what the physical painting looks like in-person, what's important is not reproduction, but representation. Conveyance.

And that's basically it. Much like this blog post, the development of this project overstepped its projected deadline, but c'est la vie.

I hope that this sort of "making of" serves insightful or entertaining, either. Until next time.

The intention with this blog is to establish a space to support any outputs I might produce that would not easily fit within the other avenues I maintain. Things that come in bites too big for social media. A workshop for longer form content. I envision behind-the-scenes postings, process breakdowns, theory talk, and digressive conjectures. It will all likely relate to creative work, if you need to apply genre.

I've given some consideration to the format of "blog." They are an extension of a long-standing human tradition of documentation, mostly. The internet blog is a recent invention in human time, but by cyber time is sometimes viewed as archaic. Very few of my compatriots still employ blogs, but I find that a significant portion of web media I ingest is still blogs, and this is encouragement enough.

This endeavor is being softly launched in its larval stage, writhing and hissing. The place is still raw, this initial posting serves as a beachhead so I can establish links. That being said, the current setup does not represent the idealized final product, and will accordingly change to reconcile the gap between construct and vision.

I will populate this place, and I will be terraforming it, and we shall see where it goes. Maybe in an eon from now, the digital archaeologists will brush off layers of corrupted pixels from this blog, and speculate as to its function. 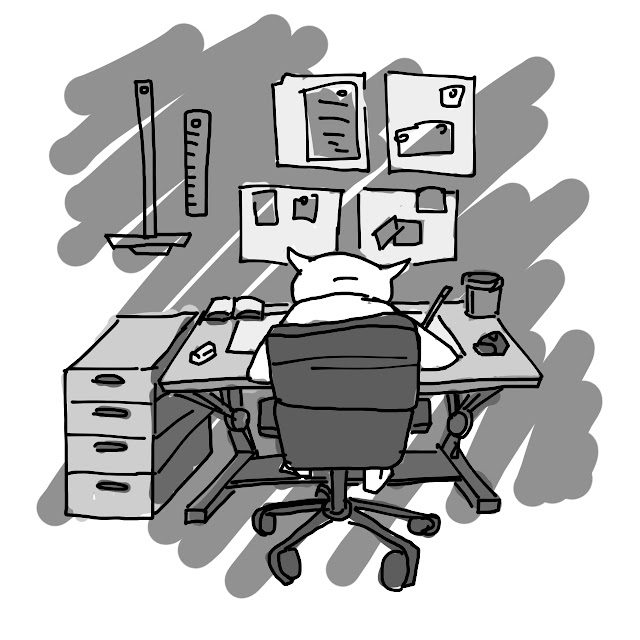