I have a collection of sketchbooks. I have a fair few journals. I actually just ordered another sketchbook. A large portion of my sketchbooks are not full, some not even halfway so. I often struggled with the idea that I must fill a sketchbook before I can move on to the next one.

But that of course isn't true. A sketchbook is like a suit or a dress, we have one for every occasion.

However, despite the multitude and variety of sketchbooks in my possession, I find it noteworthy that a fair amount of preliminary, formative work is done outside of the sketchbook.

Scraps of paper, margins, sticky notes, the backs of receipts and envelopes. Loose drawings and notes that build a conceptual shorthand. A lot of these are whipped up during idle time in between tasks, lulls in work. 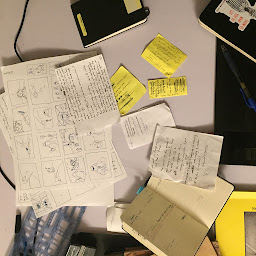 There is something incredibly versatile in working with small pieces, and the medium offers a unique immediacy that the sketchbook cannot.

The scraps start out with a low base value. Easily obtainable and disposed of, they don't intimidate with their blankness the way more refined and expensive paper or canvas. They accrue value when layers of marks, useful marks, are deposited. Having ideas made into physical, malleable pieces, allows a tactile means of organizing, comparing, and recompiling data.

I can stack and shuffle things. I can put them up on the wall. They are fluid. 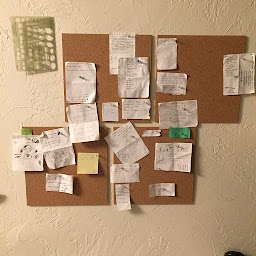 There does arise a problem, though. The scraps build up. Rapidly. And once inscribed, their perceived value rises, and they can become overly precious, lingering too long. It's important to stay on top, these scraps are intermediaries that require refinement and transposing, after which they may be disposed of.

This method of working is not mine alone. But recognizing and validating it as a part of the larger creative process helps remind us that mindless scribbles are just as important as "traditional" sketchbook work. It's not a waste of time, and it does not delegitimize us as artists to work outside of perceived typical spaces.

P.S. I'm aware that the mobile display for this blog is still having issues, this has my attention and will be corrected at some point.